So, the first two games are done, and, like last year, the CBJ have lost both. Already, there are people screaming for Torts head on a platter. I'm not one of them, as it's ONLY TWO GAMES!!!!!!!!! What happens if he goes on a 80+ game win streak? Are you going to apologize for asking for his head on a platter? (Probably not.) I have some faith in this team right now, as it seemed like they started to head in the right direction at the end of the Sharks game. I want to see what this team does over the next two months before I make any type of move in the coaching area.


Something else that is really annoying me, is the guy in my section who thinks everytime that we have the puck in the offensive zone, they need to SHOOT THE PUCK!!!! He seems to only do it when we are on our shoot side. Dude, they can't hear you. I've been down on the ice, and it echos REALLY bad. The players also have people banging on the glass, the skates make noise, they have their teammates shouting at them etc, so our players can't hear you. Also, a player on the Edmonton Oilers has this to say.. click here to view the video

Hats off to the Columbus Blue Jackets for yet another awesome opening weekend celebration. Getting to see  the players walk the blue carpet and high five them. Also did the third annual March of the Union Army. It was a nice event, and hope to get it bigger next year. Thanks to Kevin Valentin, Mark Rucker, Marc Humker, Dennis Kelly and everyone else who showed up to march.

Tomorrow night, we take on the Chicago Chickenhaws. Last time we played this team, we beat them and we got to listen to all their sober and coherent fans talk trash about golf and stuff. Best part, had a Blackhawks fan yell at another one about being a jackass. If only those dirty birds would do that kind of thing to their own.

Below are a couple of pictures from the blue carpet last week. Two of my favorite guys, Scott Hartnell and Boone Jenner. 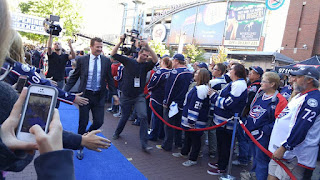 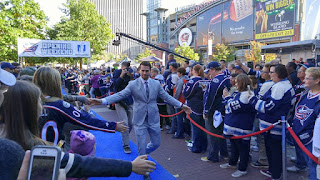