How about them Blue Jackets? Hard to believe that my last post, they had lost their first two games, and now...they are heading for a playoff run. Now, they are going to make a deep run in the playoffs. This is a great time to be a Blue Jacket. I'm really enjoying this season.

The reason I'm posting right now, is that I just made a (voice) appearance on a great podcast called WithAnOhioBias. They are great guys, and made me feel comfortable. It was a great talk, and I hope to do more of them in the future, hopefully as we make a playoff run. Give these guys a follow at their website WithAnOhioBias.

Also, I want to unveil my good luck charm for the Blue Jackets. Last year, while the Monsters were making their Calder Cup run, Teressa and I went to a game. We got glass seats. The Monsters lost the game, but someone (not sure who, but we were alerted to it) took a picture of her. It was titled Resting Bitch Face.... I think this is what propelled the Monsters to the Calder Cup. Maybe it still has some mojo.. 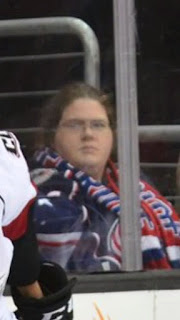