No, I'm not excited at all. This is the best time of year. The leafs are starting to turn (and will still not make the playoffs), everyone is starting to wear sweaters (my fave is #71, but I'll wear any Union Blue past or present), and the gloves will be dropping again, along with the pucks.

Our first pre-season game is against the dirtiest of the dirty birds, the team-that-shall-never-be-named, and the team of the Crysby. Kessel, Crybaby, and Malkin are not going to be there, according to the local press, as Kessel and Malkin are playing in their Tuesday game. Apparently, Crysby has a tear duct infection to deal with, and is day to day.

I've been counting the days down to this event. This is our first step to a special season for us. With the addition of Saad and Campbell, and being healthy, we are looking at a season where teams are not looking forward to seeing the Union Blue on the other side. They are going to hear ALOT of the cannon this year.

Fan Fest..or 5th Line Fest, as it's called now, was a great event this year. I only got two autographs, in Justin Falk, and Greg "I have a broken leg, but no way in hell is Crysby scoring on this power play" Campbell. Campbell is the one I really wanted. He came from Boston, which is my second team, as I lived there for a few years. Plus, and more importantly, he is a bad ass. I think he and Saad are going to bring some leadership to this team on a team that is already rich in that area. Based on what I've seen about Saad, he's already fitting in well and looking forward to seeing him on the ice. 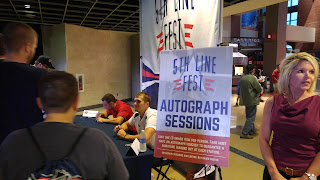 That's Campbell in the red shirt, with Falk in the white. Both great guys...I have more pics, but need to get them off my phone, and I'll post them. I'll also post some pictures from the game tomorrow as time permits. I'm going to all three games this week, fly to Seattle to see my new grandson Friday morning, back on Monday night, in time for the next home pre-season game.

I do want to address the Kane situation. I read in an article today that it looks like the charges won't stick due to the DNA not matching his. That article is here. My take on this situation is simple. He should not be with his team until the case is resolved. While it looks like he's in the clear, which is a good thing in my opinion. But Slava Voynov was accused of domestic violence. He was immediately suspended. Call me crazy, but rape is a couple notches above domestic violence AT LEAST! Kane should have been suspended pending the outcome. I hope he didn't do it, and is cleared, but treat him like everyone else. Don't do the NFL route and do it based on your mood that day.

That said, I'll end on a happy note. I hope to get to meet alot of you this year at the Cannon this year, starting tomorrow night.  GO CBJ!!!!!! And don't forget, the March of the Union Army is happening again this year. It happens Friday, October 9th, which is opening night. We start at R-Bar Patio at 5:30pm and we march to Nationwide Arena. We have about 100 people so far, and hope to see you there as well.