It's been a week since Cannonfest 2015. People are getting excited about the upcoming season. The players are starting to come into town to start getting ready for camp. There is a chill in the air (right now anyway..it's going to get hot again). Did my first Fantasy draft today. Hockey season is coming.

Cannonfest this year was head at Dick's Last Resort in the Arena District. It was a very warm day, definitely not hockey weather. It was well attended, and there were some familiar faces there, such as the Boone's Goons, CBJ Avengers, the Union Blue Soldiers, the CBJ Artillery, and the Monster's Jacket fan club, which represented the Lake Erie Monsters. I had the honor to help out at the Union Blue Soldiers table and help promote the March of the Union Army (Cheap Plug time) that will be held Opening Night, Friday, October 9th beginning at 5:30 in front of R Bar. You must be there if you are a CBJ fan, or a very confused Rangers fan (as if there is any other type)

Below are some pictures I took at Cannonfest. Not a lot, but proves I was there.... 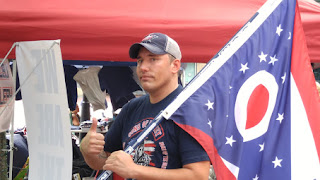 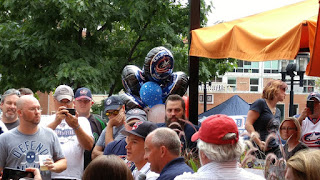 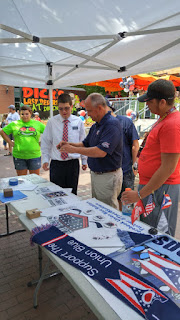 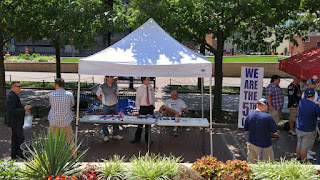 Sonny Milano was the surprise this year. I'm looking forward to see him in a CBJ uniform this season. He is going to be a special kid.

I missed the videos from Shane Guilfoyle this year as I was at the UBS table, but I've watched them, and they are excellent. Excellent job, Shane. I particularly like the third one, as it starts out with the Prout beatdown of Lucic.

Three weeks from tomorrow (Monday), the CBJ have their first pre-season game against the Crysby Flightless Birds that Smell. I'm excited for that. That is also the week I may become a grandfather, which is very exciting as well. (Much more so, I have to admit). The season cannot start fast enough for me. My grandson can't get here soon enough.